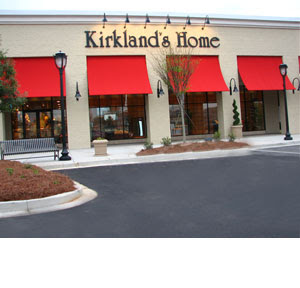 You know, I'm not really sure how many of these Kirkland's retail stores are around, but there is one right near me and I like to pop in from time to time to see what's new. They give new meaning the word "resin" but often there is something I like. I got a fantastic cut glass night light there for a whopping $5. What's not to love about that?
The link for the $10 off $50 coupon is here.
Posted by Marie at 12:01 PM No comments:

I do actually use this product and it DOES work.
http://www.shoutitout.com/coupon/06-10-shoutsample/
(Thanks to CouponersWanted.com for the link)
Posted by Marie at 12:57 PM No comments:

We went to see the orthopedist on Monday. He did the usual bend over and touch your knees, checked her spine and then went off to look at the X ray I brought. Funny how I asked specifically if I needed to bring it or not and was told not to bother, that they can pull it up online.
You should have seen the nurse's eyes light up when I said I'd brought it with me. "OH thank God, " she exclaimed. "Those are a total nightmare to pull up online."  Plus one for mommy.
The doctor declared DD12 to be a candidate for the watch and wait program of treatment. Her curves were under 25 degrees (the radiologist said 21 and 22, but the orthopedist said more like 20). Since this interpretation was in our favor, I gladly took the smaller number assessment. We come back in 6 months for another X ray to check it.
Could this progressively get worse in the meantime? Maybe. I've read about 80% of curves at 20 degrees don't progress. So fingers crossed.
Posted by Marie at 2:12 PM 1 comment:

There are days and then there are my days

For the past two weeks the fun has sort of all been sucked out of me. And it's cold. And if you can tell from the photo on the left, I don't really enjoy the cold or sitting out in it, or sitting out in 49 degrees and wind in MAY (oh wait, I forgot, was Spring cancelled)? I can hear the yard guys mowing right now as they've descended like helicopters from that scene in Apocalypse Now (cue soundtrack) to mow my grass even thought it is still freezing here and the grass is barely growing.
I love the smell of diesel in the morning.
A friend posted on my Facebook page that the only photos I have shared lately are of me in my black winter coat freezing at various locales with a scowl on my face. That pretty much sums up my mood of late. Baseball started in earnest last week, and Ubercoach has been having the boys attend all sorts of batting and pitching practices indoors since it is cold and or cold and raining. Turns out DS9 is terrified of the pitching machine and for good reason. That thing makes a hell of a noise and suddenly whirls a ball at you at 45 miles per hour.

The coach kindly pointed out that the machine is much more accurate than the other 9 year kid pitching it, which wasn't exactly what either of us wanted to hear.
And since Spring has been cancelled (you heard, right?) the two games thus far have both occurred in 40+ degree weather with me either wrapped like I'm preparing for an ascent on Everest or sitting in my car running the heat.
The boys have won two games now. DS is clearly not going to college on a baseball scholarship and he is smart enough to know it (meta cognitive for you playing the advance SAT vocab blog game). He actually complained the coaches were too nice and too supportive and he wished they'd stop congratulating him on a good effort when he knew full well he dropped every ball that came his way and couldn't swing a bat at a barn. Sigh.
And I've not been feeling well. Eh. I don't know. Kidney stones? Virus? Likely caught something sitting in the cold watching games (by the way where the hell is daddy and when is he going to sit out there for three hours?) Never go online when you're sick. I'm convinced now I have Lupus. Or cancer. Or both. My work did an on site health screen a while go and my blood pressure was 94 over 65. Apparently I'm so healthy I'm dying. I told the nurse it was time to take up smoking.
DD left for a three day orchestra trip out of state and I'm freaking out already. The band director posts updates to Twitter every hour, and even videos, but she's short I can only sorta of see the top of her head. I'm not convinced my little absent minded professor has not been lost or left behind at some rest stop. I want proof, preferably holding today's newspaper.

DD and I also get to visit the orthopedic surgeon on Monday. Scoliosis. Wee! Can it all get more fun here? While only 2% of kids apparently get scoliosis, only a smaller percentage needed the xray we needed and an even smaller percentage get sent to the orthopedic surgeon for a consult. And I'd like to ask seriously, does EVERYONE know some girl in the 8th grade who wore a scoliosis brace that looked like a cross between walking traction and steel framing? If you do, be quiet. You're making my head hurt.
I tried to get some sympathy from the cello teacher regarding DD's scoliosis and how it could possibly affect her bow hold (which we have been working on for forever), only to be told by the cello teacher that she herself has scoliosis and has one leg a half inch shorter than the other and no, her bow hold shouldn't be affected and yes she needs to suck it up and learn to hold it correctly. She probably has Lupus, too, just cause.
And my house smells a bit like pee from new insulation. And Jewel stopped running catalina deals on a spread. And I'm cold.
Bleh.
Posted by Marie at 5:23 PM 2 comments: