Holy cow! Glad I never threw it out! 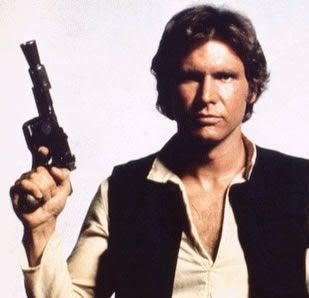 (Han Solo, I still luv you)
Today we went to the library and my daughter found a book on Star Wars collectibles. I'm not sure what led her to it, maybe it was The Force, but what a discovery we made!

Not exactly Antiques Roadshow stuff (do you all remember the episode with the guy who found a 15th century Milanese parade helmet in his attic worth $250,000?), but what a fun find. My kids are making runs up and down the basement stairs to the storage room finding Star Wars treasures in a box and asking me to Google them, and then asking if that's enough to buy a DS. Apparently my childhood treasures have been reduced to booty towards a video game system. Ah well.
Posted by Marie at 9:11 PM

These days any find like that is great! Hope you can make some money or save till later and make some! I have a few old Starwars things that I guess I need to drag out!