A day in the life of French camp

I have no idea what is going on in camp as I have had zero (ZERO) communication with them now for four days. I can only surmise the following based on the photos posted on the camp website.

It's day three of camp now, and every five minutes I have been checking the camp blog for photos of my kids, preferably holding today's newspaper so I know they're still alive. I even called the camp yesterday like a neurotic mother (which I am) just to get assurance that no one was sick, and yes, yes, the kids were having a good time.

Check in to camp was quite an experience I was told by my MIL, who along with my FIL escorted the kids from the airport to camp (with a stop at the head waters of the Mississippi river in the Itasca State Park). The kid's luggage wouldn't fit in the rental car and had to be trucked to camp directly by camp counselors who were at the airport picking up other campers. If they'd arrived on Sunday, as originally planned, I'm not sure what they would have done with the two tons of luggage I sent them with.


According to my MIL, William was a bit overwhelmed that they were actually all speaking nothing but French to him (Really? William, how many times did mommy say this to you? Oh wait, maybe I was saying it to him IN French). In William's words, these people were "all speaking gibberish at me and I kept saying YES." I guess this explains why my son is now signed up for Bread Making.

There was a little interview with each child to assess their French. Catherine pronounced she'd done quite well and had gotten as far as describing what was happening in some comic strips she was shown. William, my little monoglot, no so much.


By the time they'd gone through all the check in stations, William was trying to convince my French-speaking MIL to not leave them: "But we need you to translate!"

In one healthy piece!

William's first words were how the plane to Bemidji had propellers on it. He went on and on about their lay-over room, that it had snacks and a PlayStation and TV and it was fun!

Catherine's first words were that she had a headache because the propellers were so loud. And the trip was "fine."

Gotta love my kids!
Posted by Marie at 2:03 PM No comments:

They're on the plane. Finally

I don't travel that much, but when I do, I'm prepared and things seem to go well. That wasn't the case trying to get my two kids to summer camp yesterday. We arrived in plenty of time for the flight, but the weather wasn't great at 7:30am as storms came through and delayed the plane coming to O'Hare from Minneapolis. The kids would miss their connection in Minneapolis to Bemidji, the next connection was full, and the following one was the last of the day and unaccompanied minors cannot fly the last flight of the day in case it is cancelled (and they'd be stuck in Minneapolis). We all looked at each other. Were we really going to have to all go home and try again on Monday? Lots of tears ensued as the kids realized they were going to lose their extra day with the grandparents in Bemidji. At least they weren't going to be late for camp. And I actually wasn't that keen to see them fly during bad weather.

I'll cut to the chase for today. The kids got on the plane this morning but it was the absolute worst travel nightmare in my history of flying from O'Hare. We got up at 4am and left at 5am for a 7:45am flight. By the time we got to the terminal, there were at least two hundred people in line at Delta, and at least that many at Security. Apparently the entire city of Chicago was in a desperate need to go somewhere on Delta RIGHT NOW. That included US.

We waited for 20mins at the ticket desk line, nowhere near the back and forth queuing area yet, when I came to the very sudden realization that they were going to miss the plane.  I walked over to first class check in (where there was no line) and said PLEASE HELP US. We were bumped yesterday, they are unaccompanied minors, there are forms and forms to fill in and they are never going to get through the line. The Delta agent was very nice and helped us with everything. OMG. They even waived the checked baggage fee because we'd been bumped. (double OMG) But by now it was 6:50 and we needed to get through security. Delta told us to go to Terminal 3 next door to a shorter line.

Off we went, via the outside, and Catherine started wheezing from the exhaust and the humidity. We get to terminal 3. There are about 100 people in line. We were a nervous wreck. Catherine is puffing her inhaler and I am sweating bullets. I am half attempted to ask the large party of Chinese travelers if we can pretty please get in front of them No dice. We get through security at 7:20am for a 7:45am flight. I tell John and William to RUN (remember, we have to get back to terminal 2). Catherine can't run because she is going to wheeze again. Thank God our gate was E6 and not E67 or we would not have made it. The gate agent is standing there looking for us; the plane is waiting for us. John asks how much time do we have and she says ZERO. Kiss kiss bye bye throw them on the plane. Door closing. Catherine is still wheezing. I tell them she has asthma and WATCH her.

What the hell? I've just put my (slightly) wheezy kid on a plane?

I checked and the plane landed in Minneapolis at 9am and since I think if there were a medical emergency they'd call me, no one called. Oh, John did call from work on "private name" on the caller ID which freaked me out. They have a connection at 11:20am to Bemidji where their grandparents will meet them.

It's at this point we digress and I speak directly to all those wonderful husbands who know so much about aviation. When your wife is near nervous breakdown because she's been up since 4am and about to ship her kids to camp, alone, it's not the time to point out the kids are flying a tiny little plane by a pilot who "doesn't have as many flight hours or training as the guys who fly the big ones."  Really? Well this is what they flew to Minneapolis:

And this is what they're flying to Bemidji:
So who flies that one? The flight attendant assisted by my kids?

I am a basket case. I have a headache. Wonder why?
Posted by Marie at 10:21 AM No comments:

How do you spell dumb?

None of this surprises me. It isn't cool to be smart. It's more fun to tease smart children than encourage them. Read the comments to the link. Smart people are the Intelligentsia. They are elitist. They "rub it in." Sports matters more than grades (ever seen a parent plant a My Kid Made the Honor Roll sign in their front lawn? Better they make the cheer squad or play football). Being smart isn't something you share. You keep it quiet so the dumb people won't feel bad. God forbid we have Valedictorians or Salutatorians. The kids who didn't make it might be sad.


Americans beat their chest with pride and are full of WE ARE NUMBER ONE but tell them their kids scores are the laughing stock of the world's schools and we can't hold a candle to what the kids learn in Europe and Asia (nor find it on a map) and we are quicker as a nation to say "who cares about them" than "how do we fix this?"
Posted by Marie at 2:47 PM No comments:

I am a freaking domestic goddess 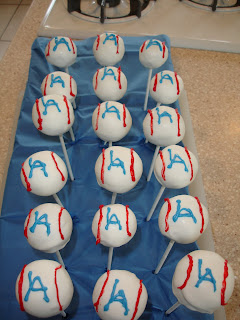 I made these cakeballs for William's end of the season baseball part. Yes, this was my first time (duh), and yes, apparently I must be suffering from some sort of DT tremors because MY GOD my hands shake! In fact, I think if I had had a drink I might have done a better job.

I spent about six hours making these, two of which were between  8 and 10am this morning calling every JoAnn Fabric store, Micheal's, Hobby Lobby and Target nearby trying to find a paint pen that actually works on chocolate (damn you Wilton FoodWriter pens--you SUCK on chocolate). I ended up buying frosting tubes at Target. I must have spent $50 on these things, $45 of that trying to find a frosting that wouldn't run.

These bad boys were the hit of the party, even though I was amazed that no one knew actually what the hell they were. The boys thought I'd made lollipops! Even the moms (who seemed much savvier that I) had never seen anything like them before and thought I'd used some sort of strange, round cake mold.  They had rather a raunchy time asking their husband's if they could taste their balls. Ah well. It didn't take long to descend into that, now did it? (I did get rather a laugh when I suggest they make them in chocolate and cover them with toasted coconut and call them Hairy Balls). Yeah, I guess I can go all gutter-mouth if I need to.
Posted by Marie at 9:24 PM 1 comment:

Congrats boys for a great season!

How little league is supposed to be

One of the moms made this slide show of the team from photos she took over the season.