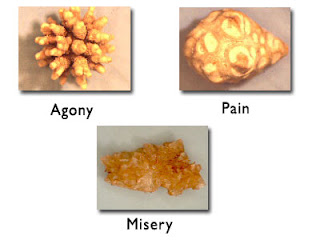 I don't know what Bill was serving in his mystery alcoholic drinks cause I was too doped up on pain meds by the time we arrived, but I ended up passing a kidney stone while there and Eileen was taken off to the hospital for gall stones not 48 hours later.

Coincidence or conspiracy? You decide.
Hey Bill, was it vodka or lighter fluid you used in those mixed drinks? I may not make it to the party next year at this rate, or was that all part of your evil plan?
Seriously though---passing a kidney stone is not pleasant, and the little meteoroid that inhabited my inner space made its move about 15 minutes before we were set to leave for Bill's. You know how in space, no one can hear you scream? Well in your bathroom, the entire house can hear mommy giving birth (practically). This did not seem to dissuade the kids or the husband from knocking on the bathroom door to ask me if we were ready to go yet! I think my little hunk of moon rock must have turned a corner from my ureter in my big ol' black hole of a bladder because I felt fine a few minutes later, and two capsules of something narcotic I had (on prescription, thank you) did the trick. Lo and behold, two hours later there it was, a little piece of calcium agony. And just like that I was cured.
It's a miracle!

Just like Riley's birth of the namesake Life of Riley party at Bill's.
Hope you feel better Eileen. Next year we need T-Shirts. Life of Riley ROCKS!
Posted by Marie at 12:50 PM